Abstract: The lecture will address the biographical and socio-political consequences of the emergence of precarious employment understood as the employment which is uncertain from a perspective of a worker. The author will situate the case of precarity in Poland in the context of broader changes taking place in late capitalist societies. Even though Poland has observed the visible rise in the share of precarious employment following the end of state socialism and, most intensively, in the last 15 years, the level of industrial conflicts in the country remains very low as compared to many Western and Southern European countries. While the latter phenomenon can be explained by a range of structural and institutional factors, the presentation will take on worker-centered perspective to understand the role of individual life strategies for the emergent dynamics of protest and patience in the country.  On the one hand, the existing research suggests that for a young generation of Polish workers unstable, insecure and fragmented career patterns became “institutionalized” in a similar manner to the patterns of “normal biography” related to long-term employment in one workplace in older cohorts of workers. On the other hand, the studies also show the gaps and cracks in such a biographical “normalisation” of insecurity manifested in the various forms of individual ‘exit’ (most notably through migration) and new expressions of workers’ ‘voice’, including young people involvement in the right-wing (and to lesser extent left-wing) social movements and protest voting for right-wing populist parties. In the presentation, both “normalisation” of precariousness and its social and biographical limits forming a potential basis for “counter-movements” against  will be explored based on the results of two research projects, the PRECARIR project (funded by the EC DG Employment, Social Affairs and Inclusion) and the DFG-NCN funded PREWORK project. 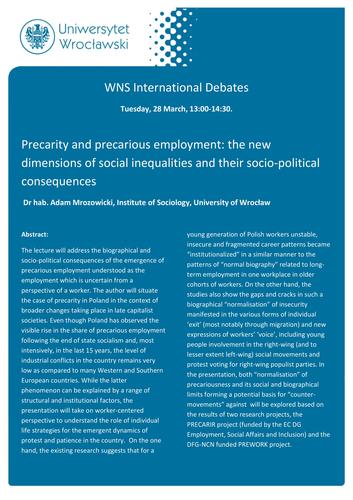